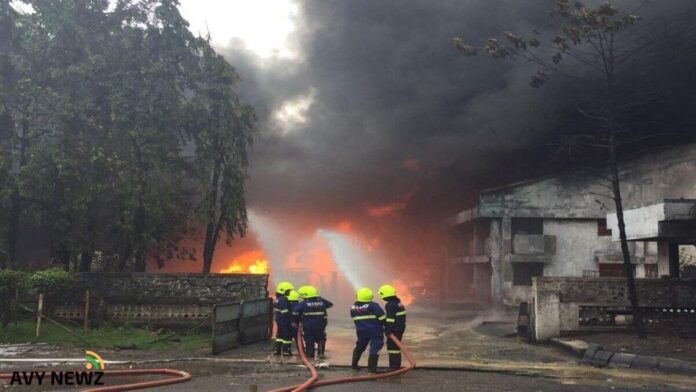 In Navi Mumbai, 45 BMW cars were burnt in a fire at the BMW Service Centre-cum-Warehouse at Turbhe MIDC, Navi Mumbai at around 5.30 am on Tuesday, leaving all parking cars on fire. 45 BMW cars parked on the spot were completely burnt.

As soon as the fire broke out in the showroom of BMW cars, fire tenders reached the spot. But the fire was so severe that it took six-seven hours to control it. Somehow the fire was brought under control with the help of ten fire tenders. But in the meantime, the expensive BMW cars parked there were badly burnt.

“40-45 BMW cars were completely burned in the fire, which was doused by ten fire tenders at around 1 pm on Tuesday,” news agency PTI quoted him as saying.

A fire broke out at a BMW showroom at around 5.30 am on Tuesday, destroying several cars parked there, MIDC Fire Service Chief Fire Officer RB Patil said. He said that 10 fire tenders were sent to the spot and the fire was brought under control at around 1 pm on Tuesday.

By the time the fire brigade and police team reached the spot on receiving the information about the fire, a lot of damage had been done. It took 6 to 7 hours to extinguish the fire, from this it can be estimated how fierce the fire must have been. Not only BMW was serviced in this car showroom and workshop, but cars like Lamborghini, Porsche, Rolls Royce were also serviced. Many small cars were also serviced here. The car dealer has also clarified that the cars were badly burnt, but it is a matter of relief that there was no incident of any casualty.