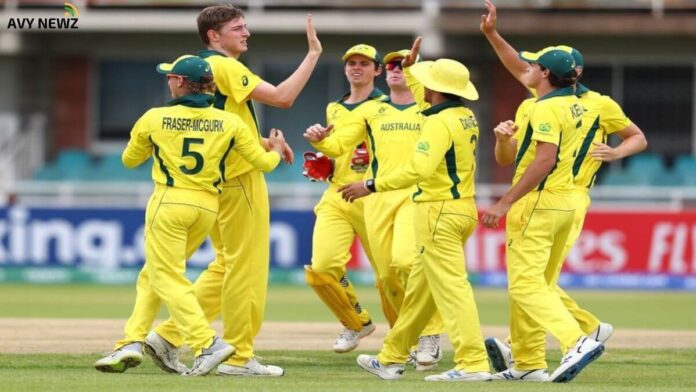 Australia Under 19 reached the semi-finals of the ICC Under 19 World Cup 2022 after beating Pakistan Under 19 by 119 runs at Sir Vivian Richards Stadium, North Sound in Antigua on Friday. In this match, Pakistan Under 19 won the toss and decided to bowl first.

In the first innings, the Australia U19 batsman scored 276 runs in 50 overs and lost 7 wickets. While high-scorer batsman Teague Wyllie scored 71 off 97 balls, Corey Miller scored 64 off 75 balls, Campbell Kellaway scored 47 off 63 balls and captain Cooper Connolly scored 33 off 25 balls. Where the bowlers of Pakistan U19 gave 14 extra runs to the Australia team.

Cricket World Cup tweeted on Twitter and said ” A comprehensive victory for Australia!!!! They are now into the semi-finals of the Super League stage with a 119-run win over Pakistan🌟”

A comprehensive victory for Australia!

They are now into the semi-finals of the Super League stage with a 119-run win over Pakistan 🌟#PAKvAUS | #U19CWC pic.twitter.com/c5fnjVhoAZ

Where Pakistan Under-19 batsman scored 157 runs in 35.1 overs and lost all wickets. Where Mehram Mumtaz scored 29 runs in 19 balls, Abdul Faseh scored 28 runs in 44 balls and Irfan Khan scored 27 runs in 42 balls. The batsman of Pakistan Under-19 also does not perform well. Where the Australian bowler was given 7 extra runs. The Pakistan team and Australia U19 team, chasing the target of the Australia U19 team, won the match by 119 runs.