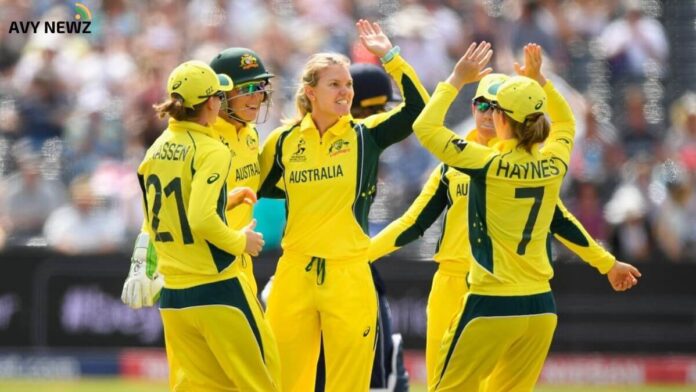 Australia Women won the match against South Africa Women by 5 wickets which were played at Basin Reserve in Wellington on Tuesday. In this match, Australia women’s team won the toss and decided to bowl first. Where the women of Australia chase the target of the women of South Africa.

Australia Women chased down South Africa’s target in 45.2 overs where they scored 272 runs and lost 5 wickets. Australia’s batsman Meg Lanning scored the most runs scored in ICC Cricket Women’s World Cup 2022, where she scored 135 runs. Another batsman, Tahlia McGrath scored 32 runs, while Ashleigh Gardner and Annabel Sutherland scored 22 runs each for their team.

As IPL season is ready to be commenced and If you like to play fantasy games, then check out our new fantasy app 2022.

ICC tweeted on Twitter and said, ” After her match-winning 135* against South Africa, Meg Lanning leads the pack for most runs scored at ICC Cricket Women’s World Cup 2022 👊“

After her match-winning 135* against South Africa, Meg Lanning leads the pack for most runs scored at ICC Cricket Women’s World Cup 2022 👊

South Africa Women’s team scored 271 runs in 50 overs and lost 5 wickets. Where Laura Wolvaardt scored 90 runs for his team. While another batsman, Captain Sune Luce, scored his half-century, where she scored 52 runs. Another batsman Lizelle Lee scored 36 and Marizanne Kapp 30 against Australia. But they could not stop the Australian batsman and they won the match by 5 wickets.