Brahma Mishra(Lalit From Mirzapur) Found Dead In His Apartment 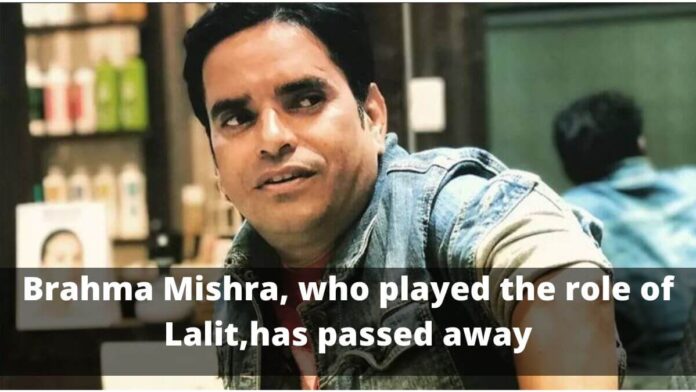 Brahma Mishra, who played the role of Lalit, Munna Bhaiya’s friend in the web series Mirzapur, has passed away. According to sources, the actor complained of chest pain and visited a doctor on November 29. He was told by the doctor to relax at home and gave him some gas medicine. However, Later today he was found dead at his home. Brahma was alone for the last four years at his rented apartment.

Brahma Mishra was living in a rented apartment in Enlux Nagar Society, Mumbai. He was found dead in his bathroom. The neighbour of him doubted of the foul smell of his dead body and informed the police. After police arrived at the spot, the flat door was locked from inside. With the help of a locksmith, the door was opened and the dead body of Brahma was found in the bathroom. His body was in semi-decomposed state and half nude.

Police have registered an accidental death report on the statement of Brahma Mishra’s brother Sandeep and also seeing the condition in which the body was found. According to police further investigations in the case are going on. It is being suspected that the actor died from a heart attack. However, the final cause of death is awaited.

Many of his co-actor from the series pays tribute to him and show their sorrows. Actor Divyenndu, who played the role of Munna Bhaiya in Mirzapur, condoled his death on social media. Sharing a picture with Brahma, Divyenndu wrote, “RIP Brahma Mishra. Our Lalit is no more. Let’s pray for him everyone (sic).”

Actor Vijay Varma who was also seen in Mirzapur season 2 was equally heartbroken with the news as he re-shared Excel Entertainment’s story and wrote, “No (sic),” with a heartbreak emoji.

Actor Brahma Mishra will be well known for his role as Lalit in the Indian web series Mirzapur. May his soul Rest In Peace.