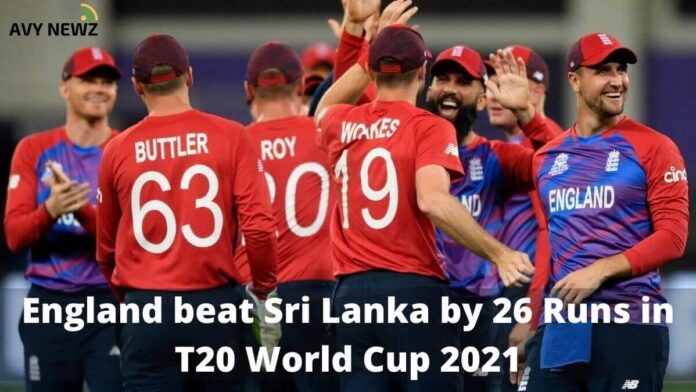 T20 WORLD CUP 2021: England defeated Sri Lanka by 26 runs in the ICC Men’s T20 World Cup 2021 played at the Sharjah Cricket Stadium in Sharjah on Monday. Jos Buttler was in excellent form and scored a century in the T20 World Cup.

In the last match, England vs Sri Lanka, where Sri Lanka won the toss and elected to bowl first against England. Where England scored 163 runs in 20 overs and lost 4 wickets. But Sri Lanka’s team was all out in 19 overs where they could not chase down the target of England. England won that match against Sri Lanka by 26 runs.

Jos Buttler leads England off the field with plenty to celebrate as England have their fourth win on the bounce 🎉@RoyalStaglil | #InItToWinIt pic.twitter.com/Vq3g9Vjna5

England batsman Jos Buttler was in excellent form and scored 101 runs in 67 balls and where another batsman Eoin Morgan scored 40 runs in 36 balls. In this, Sri Lankan bowler Wanindu Hasarnaga gave 21 runs in 4 overs with 3 wickets. Another bowler Dushmantha Chamira took 1 wicket in 4 overs and conceded 43 runs.