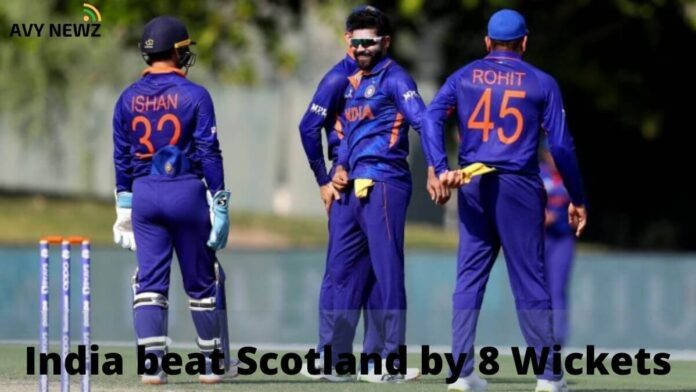 In the match played between India vs Scotland on Friday, India won the toss and decided to bowl first and they chased down the target of Scotland. Where Scotland were all out in 17.4 overs and scored only 85 runs. India chased down that target in just 6.3 overs and scored 89 runs for the loss of 2 wickets. In their last match played at the Dubai International Cricket Stadium, India defeated Scotland by 8 wickets.

India’s batsmen and bowlers were in excellent form. India’s openers KL Rahul and Rohit Sharma got off to a great start with KL Rahul scoring 50 off 19 balls and Rohit Sharma scoring 30 off 16 balls. Both the openers shared a strong partnership till the end as they chased down Scotland’s target in 39 balls.

Scotland batsman George Muncy scored the most runs in his team with 24 runs in 19 balls, where the other batsman did not perform well and did not even score more than 17 or 18 runs. Scottish bowlers Mark Watt and Bradley Wheel took 1-1 wickets in 2 overs against India.