Karnataka CM BS Yeddyurappa announces resignation, will meet Governor after lunch & Said – I have always gone through the ordeal 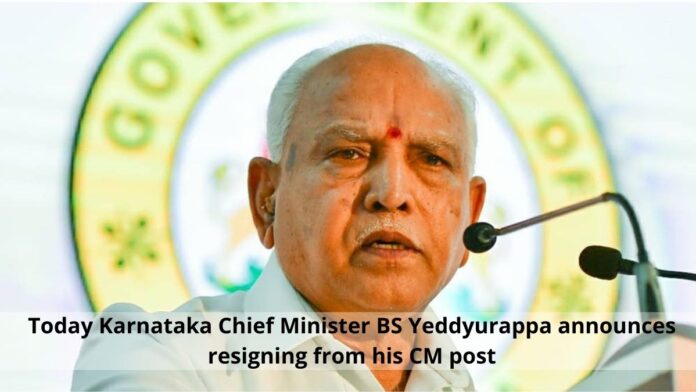 And said that I will meet the Governor this afternoon and submit my resignation to him. He also said that I have always gone through the ordeal.

The leadership of CM Yeddyurappa was more good, the Lingayat community was in his support, BJP will now have a lot of trouble in handling Lingayat society. What if the BJP tries to remove Yeddyurappa, the BJP government will have to face the consequences.

Contents show
More then 100 seat of lingayat community in karnataka
Who can be new chief minister of karnatka?

More then 100 seat of lingayat community in karnataka

In such a situation bjb has to face much trouble if they will remove Yeddyurappa from his post, and if they will do this then they can be lost the lingayat vote in Karnataka.

Who can be new chief minister of karnatka?

Other than Yeddyurappa, another CM will also be coming from the Lingayat community may be. However, some media reports have also claimed that a non-Lingayats cm also can be seen For this time But will be clarified soon.

1. Maybe That, Basavaraj Bommai is the first name coming to become CM. Bommai is coming from the Lingayat community. And is the Home Minister in the Government of Karnataka Parliamentary Affairs Minister and Law Minister right now so he can be a new cm of Karnataka.

2. Vishweshwara Hegde Kageri is the Brahmin face of Karnataka and is currently the Speaker of Karnataka Legislative Assembly, So he also can be next cm.

3. State Mining Minister MR Nirani is also an option for the new Chief Minister. They also come from the Lingayat community.

4. Other than all these the name of Union Coal Mining Minister and Parliamentary Affairs Minister Pralhad Joshi has also come on the list.