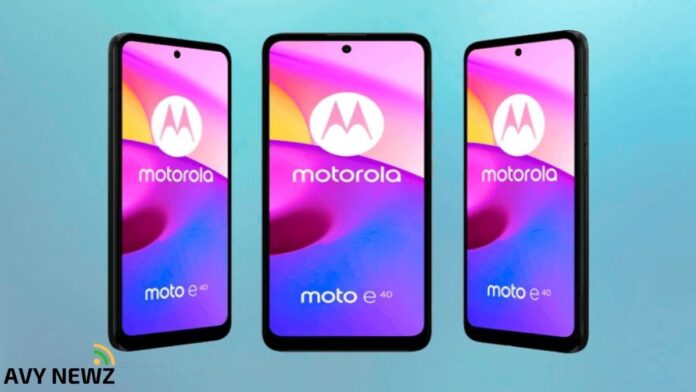 MOTOROLA NEW DEVICE MOTO E40: Motorola is launching a new Moto E series with the affordable device Moto E40 smartphone. It has a special feature at a reasonable price of Rs. 9,499. The most popular devices in the Motorola E series are the Moto E7 Power and Moto E7 Plus with high demands and great configuration.

The Moto E40 smartphone flaunts a 6.5-inch IPS LCD display and the display panel has HD+ 720×1600 pixel resolution, an aspect ratio of 20:9, and a pixel density of 270PPI. The Moto E40 also has a security purpose such as a rear-facing fingerprint sensor and supports the face unlock option as well.

The Octa-core Unisoc T700 chipset has been used in the Motorola Moto E40 device. The chipset is equipped with a Mali-G52 MP2 GPU. The Moto E40 supports 4Gm of RAM and 64GB of internal memory and it also supports an additional microSD card to expand the storage up to 128GB.

The Moto E40 boots Android 11 out of the box. It handled the triple-camera setup for clicking photos. The rear camera supports a 48MP primary camera and a pair of 2MP sensors. And on the front, it supports an 8MP selfie camera to take clear selfies.