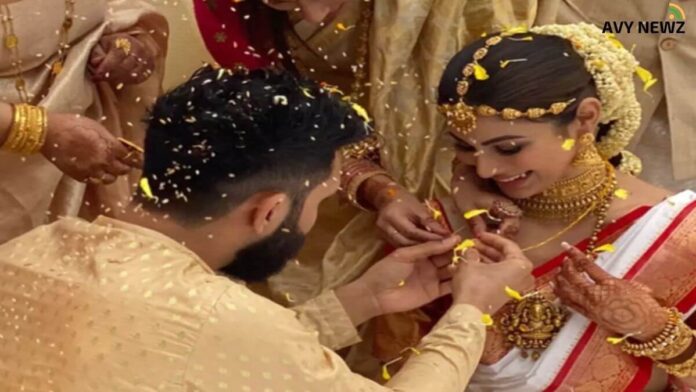 Actress Mouni Roy married businessman Suraj Nambiar on 27 January 2022 in a Bengali wedding with traditional religion. Mouni Roy is looking very beautiful in a bride outfit. Where Mouni Roy is wearing a red border white saree and statement gold jewellery. Mouni Roy and Sooraj Nambiar’s wedding venue in Goa. In the evening function where the actress wears a red coloured lehenga and the groom wears a sherwani.

TV actress Aashka Goradia wrote while sharing a post of new bride couple, ” Cause I would write a song if I could… a song about your life @imouniroy And for @nambiar13 to walk into your life when that song is at its crescendo, as after crescendo it’s that silence where you don’t need words.. but the song continues.. in our hearts which is constantly blessing you two now and forever.
She will love you with all her heart @nambiar13 and I know you will protect her… FOREVER ❤️ You two are a song.. we will sing forever! Love you lots Mouni, cannot help but love Suraj more now… Sweet tears and a heart full of prayers.. प्यार ❤️“

Mouni Roy also shared a video of her wedding and said thank you to the hotel, jewellery designer and neferrtitiweddings, ” So blessed 💫
Thank you @hiltongoaresort @neferrtitiweddings For everything So so happy 🔆🔱 Jewellery @anmoljewellers”

Mouni Roy and Sooraj Nambiar will tie the knot in two ways. That is, both will be married according to two different customs. According to reports, the marriage of Mouni-Sooraj will be completed according to Bengali customs first. After this South Indian customs will be followed. Mouni is getting married in a very royal style in a five-star hotel in Goa. The theme of the wedding has been kept white. In such a situation, this marriage will be in a luxurious style amidst white colour on the beach.