Prince Harry, And Prince William Sat Together For Dinner After The Feud. 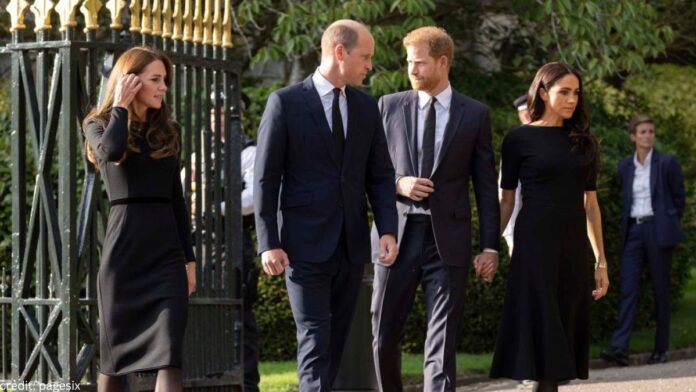 The feud between Prince William and Prince Harry has been high since The Duke and Duchess of Sussex moved to California after resigning from their royal duties in 2020. This feud got out of hand when Sussexes Meghan Markle filmed an interview with Oprah Winfrey and talked about the hardship and difficulty of being a part of the royal family.

“After this tension between brothers and their Wives they were never seen together in one frame since March 2020 for Commonwealth Day, so this appearance of them gathered in the public, mourning the loss of their grandmother was significant. After getting the news of Queen’s health Harry rushed to be by his grandmother’s side but sadly, he was late. Though that time Meghan did not join harry as she thought she would not be welcomed by the family.

In the ceremony, behind the Queen’s coffin, Prince William and Prince Harry were seen walking together. William even extended the invite to Harry and Meghan. All four of them were present at this family dinner in Buckingham Place.

One royal source said that they all are grateful that both sides putting all their work aside for The Queen.

King Charles III, during his first public appearance as a new ruler of the United Kingdom and Commonwealth, showed his love and care for his son Harry and daughter-in-law Meghan. He said, “I also want to express, my love for harry and Meghan as they continue to build their lives overseas.”

Jennifer J. Braggs
Jennifer, being a technical writer, likes to research and write articles and solutions to help others. Having great knowledge about entertainment, tech, and lifestyle. Before starting any write-up, She likes to pen down her thoughts and flaunt a creative edge in the same. Apart from being a writer, her primary interests include reading books and poems, cooking, and playing video games. she has done her college as M.com.
RELATED ARTICLES
Entertainment