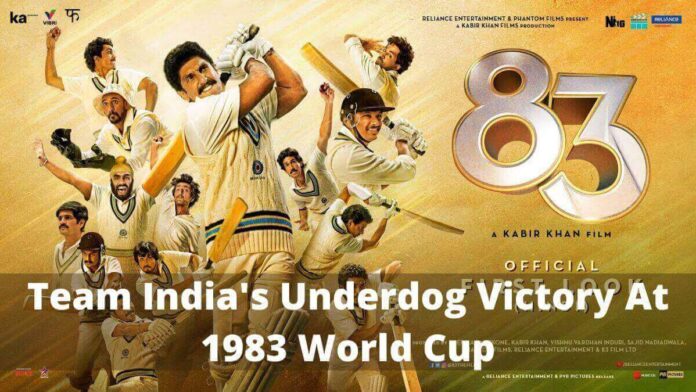 The trailer for the movie 83, the most awaited sports drama based on Team India’s underdog victory at the 1983 Cricket World Cup, was unveiled on Tuesday. The most awaited movie stars Ranveer Singh in the lead role as former captain Kapil Dev.

The trailer shows a glimpse of how the Indian cricket team started gaining momentum halfway through the series and this stability helped them from being the underdogs to winners. The rivalry between team India and the West Indies team, which was at its height at the time, is given a tonne of attention here. The other actors such as Harrdy Sandhu playing Madan Lal and Ammy Virk playing Balvinder Sandhu are quite confident in the trailer.

It is quite impressive that how Ranveer Singh was able to copy the former Indian cricket team Captain Kapil Dev’s diction. There is a list of actors who were in a supporting role in the project. Tahir Raj Bhasin, Jiiva, Saqib Saleem, Jatin Sarna, Chirag Patil, Dinker Sharma, Nishant Dahiya, Harrdy Sandhu, Sahil Khattar, Ammy Virk, Addinath Kothare, Dhairya Karwa, R Badree, and Pankaj Tripathi are the actors who are also starring in 83.

Opposite Ranveer Singh in the lead role, Deepika Padukone is also starring as lead actress.

The film was supposed to release in 2020 but was postponed due to covid.

The movie is directed by Kabir Khan and will be released on December 24, 2021.