What’s going on between Jacqueline Fernandez and Nora Fatehi? 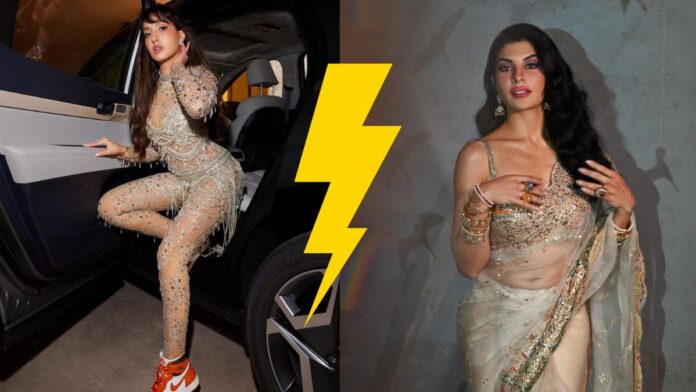 Jacqueline Fernandez is a Sri Lankan-born actress who is now stable in her career acting in India after she debuted with Aladdin in 2009 and now is a famous Indian actress and model.

Meanwhile, Nora Fatehi Is a Canadian actress, single, model, and dancer who is now predominantly working in Hindi films by making her debut in the Hindi film roar since then she has achieved a lot in her seven years of hardship in India.

Jacqueline Fernandez and Nora Fatehi have few similarities in their career as they both are non-Indians and have struggled a lot to be in the place and power they hold right now. with all those good things they both are involved in the money laundering case of 200 crores by Chandrasekhar.

It has been claimed that they both have been gifted very luxurious and expensive gifts by him and to these claims Jacqueline Fernandez hinted at Nora Fatehi She claimed that she has been defamed on this topic as the rivals in her career line are trying to decrease the competition and hence she is being defamed.

Nora Fatehi came forward and posted on her social media that her parents haven’t raised her in a way to take advantage of people and use them to visit recently was seen in the show hosted by Malaika Arora named moving in with Malaika where she stated that she has worked really hard for attaining this position and she will never do anything like that. She also sued Jacqueline Fernandez in the case of defamation.

On this topic, Hollywood has been already in the hot shots and it also came in view that  Salman Khan invited both Jacqueline Fernandez and Nora Fatehi to solve their dispute and make things normal but there are no further updates after then.

Also read these top things people like to do when they get bored or frustrated.